The Horokazawa site locality Toma (HT) is an Upper Paleolithic archeological site situated on a hillside near the Shirataki Akaishiyama obsidian source area, the largest in Japan. Excavations at HT over a period of more than 20 years have produced more than 570,000 artifacts from an area of less than 100 m2. The Horokazawa Toma lithic assemblage was characterized by the Yubetsu technique, which was used to manufacture microblades in Siberia, the Far East, and North America. The assemblage at HT has been dated to the period just after the last glacial maximum, around 15,000 years ago, and when the microblade industry was flourishing in Eastern Asia. As flakes and chips account for 98% of the lithic artifacts, the site was evidently a lithic workshop. In this study, along with examination of excavated materials we identified the source of excavated materials by macroscopic observation and nondestructive analyses, and we experimentally replicated the manufacturing technique to analyze the activities carried at this workshop and infer the distribution network of raw materials and worked stone, beginning with the acquisition of the obsidian.

The obsidian came from the East Atelier and Ajisainotaki (especially) sources near the summit of Mt. Akaishiyama. Large angular and slab-like nodules from these sources were likely collected at Hidarinosawa being closer to HT, brought to HT, and processed into large bifaces and boat-shaped blanks for microblade manufacture. Many of these products were exported to other sites. We showed by experiment that the first and second spalls efficiently removed from a large biface by the block-on-block technique. A similar microblade industry based on Shirataki obsidian is found at sites in the Yubetsu River drainage, below HT, and other sites in Hokkaido. In fact, Shirataki obsidian is found at remote sites such as Akatsuki site (eastern part of Hokkaido) and Sokol site (on Sakhalin island), suggesting that raw materials were exchanged between groups of people over long distances. This large distribution network was supported by mass production of blanks for microblade manufacturing at the Toma locality of the Horokazawa site.
Posted by Marnie at 7:33 PM No comments: Links to this post

Yaroslav V. Kuzmin, Michael D. Glascock
Journal of Island and Coastal Archaeology
Volume 2, 2007, Issue 1
(Link)
Abstract
Obsidian exchange patterns were studied on Sakhalin Island which connects Japan with mainland Asia. One hundred-eighty-two specimens of obsidian, including 157 artifacts from 75 sites on Sakhalin, ranging in age from the early Upper Paleolithic (ca. 19,400-17,800 RYBP) to the Okhotsk cultural complex (ca. 1400-800 RYBP), and 25 geological samples from Hokkaido Island (Japan), were examined by neutron activation analysis. Geochemical data suggest that all the obsidian artifacts from known sources found in Sakhalin archaeological sites were brought from Hokkaido sources. Widespread use of Hokkaido obsidian by Sakhalin inhabitants shows that long-distance contacts and exchange have taken place in Northeast Asia since at least the Upper Paleolithic. Although this obsidian transport could have been land-based during the Pleistocene, people had to use watercraft to cross La Pérouse Strait during the past 10,000 years. The distance of raw material transport was about 250-300 km in the early Upper Paleolithic, but increased up to 1000 km by the end of the Upper Paleolithic, the Neolithic, and later periods.
Posted by Marnie at 7:15 PM No comments: Links to this post

Discovery of circa 115,000-year-old bone retouchers at Lingjing, Henan, China

Most Chinese lithic industries dated between 300,000 and 40,000 are characterized by the absence of Levallois debitage, the persistence of core-and-flake knapping, the rarity of prepared cores, their reduction with direct hard hammer percussion, and the rarity of retouched flakes. Here we report the discovery of seven bone soft hammers at the early hominin Lingjing site (Xuchang County, Henan) dated to 125,000–105,000. These artefacts represent the first instance of the use of bone as raw material to modify stone tools found at an East Asian early Late Pleistocene site. Three types of soft hammers are identified. The first consists of large bone flakes resulting from butchery of large herbivores that were utilized as such for expedient stone tools retouching or resharpening. The second involved the fracture of weathered bone from medium size herbivores to obtain elongated splinters shaped by percussion into sub-rectangular artefacts. Traces observed on these objects indicate intensive and possibly recurrent utilization, which implies their curation over time. The last consists of antler, occasionally used. Lingjing bone tools complement what we know about archaic hominin cultural adaptations in East Asia and highlight behavioural consistencies that could not be inferred from other cultural proxies. This discovery provides a new dimension to the debate surrounding the existence of the Middle Palaeolithic in the region. The attribution of East Asian sites to the Middle Palaeolithic assumes that cultural traits such as the Levallois method represent evolutionary hallmarks applicable to regions of the world different from those in which they were originally found. Here, we promote an approach that consists in identifying, possibly from different categories of material culture, the original features of each regional cultural trajectory and understanding the behavioural and cognitive implications they may have had for past hominin populations.
Posted by Marnie at 9:07 PM No comments: Links to this post

Excavation of the Tategahana Paleolithic site at Nojiri-ko (Lake Nojiri), central Japan, began in 1962, and the 21st excavation was performed in 2014. The Upper Pleistocene to Holocene fluvio-lacustrin Nojiri-ko Formation is distributed in and around Nojiri-ko. Fossils such as those of Naumann's elephant (Palaeoloxodon naumanni) and Yabe's giant deer (Sinomegaceros yabei), representing the ice age in Japan, have been excavated there in large quantities; at least 46 Naumann's elephants have been found. The fossils have been excavated in strata dating to 37.9–60.4 ka, comparable to MIS 3. Analysis of fossil pollen assemblages indicates that the vegetation at the time was a mixture of coniferous and broad-leaved trees. Bone instruments and spiral flakes made from elephant and deer bones, and stone tools created from stone, not found in the peripheral region, have been excavated from the Nojiri-ko Formation, and concentrated clusters of different types of fossilized elephant bones have been found.


The top horizon containing elephant remains is 37.9 ka old, and thus older than MIS 2 (the Last Glacial Maximum), making it unlikely that Naumann's elephant disappeared from Nojiri-ko only because of climatic cooling. Findings strongly suggest that the occurrence of these large mammal fossils is the result of human activity. The Tategahana Paleolithic site provides important insights into the transitional phase from Asian Paleanthropine to Homo sapiens in Japan.

Excepts from the paper:

Three horizons have yielded bone flake tools: the U3 unit of the Umibata Sand and Silt Member and the T1 to T3 and T4 units of the Tategahana Sand Member. Typical spiral flakes from the T7 unit of the Tategahana Sand Member were detached from the long bones of S. yabei. These spiral flakes show a higher probability of being the by-product of bone marrow procurement by humans, because a percussion point is evident on the surface of each flake (Ono and Nojiri-ko Excavation Research Group, 1986) (Fig. 8).

The stone artifacts obtained from the Tategahana excavation site include edge-damaged flakes, a retouched flake, intact flakes, and cores and scrapers.

Three concentrations of large bones, such as the skulls and shoulder blades of P. naumanni, associated with spear-shaped wooden tools and large pebbles have been recognized. This circumstantial evidence emphasizes the likelihood that the site was not a settlement but a butchering or “kill” site. (Ono, 2001, 2004; Ono et al., 2002).

The artifact assemblages obtained from the U3 unit of the Umibata Sand and Silt Member to the T7 unit of the Tategahana Sand Member are distinguished by bone tools and coarse, small, lithic flake tools (Anthropology and Archaeology Research Group for Nojiri-ko Excavation, 2006).


Figure 8, Artefacts from the Tategahana site [with dates] 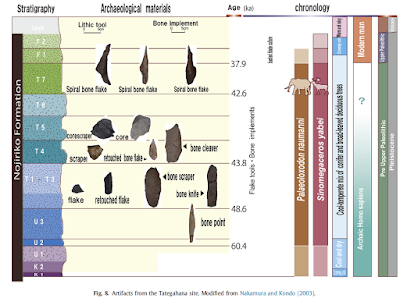 The question of whether humans lived in the Japanese Islands 40,000 years ago has so far been answered in the negative, based on the results of DNA analyses and anthropological studies using archaeological materials. Izuho and Kaifu (2015) suggest that the UP suddenly emerged in different regions of Japan around 38 ka ago, signaling the arrival of Homo sapiens in this part of eastern Asia.

This time corresponds to the upper age limit of archaeological materials and fossils from the Nojiri-ko Formation. Mitochondrial DNA analyses of the Japanese people have established the existence of various local population groups in the Japanese Islands no more than 40 ka ago (Shinoda, 2015). However, a mammoth kill site discovered in West Siberia was estimated to have an age of 45 ka(Pitulko et al., 2016). This important discovery shows that humans had reached Siberia by that time, and necessitates a DNA-analysis based review of the age of human diffusion. The discovery of moose fossils in the Nojiri-ko Formation indicates that moose moved from Siberia to Honshu Island. The possibility that humans crossed from Siberia to Honshu Island earlier than 45 ka ago is undeniable.

Tsutsumi (2011) notes that it is difficult to judge whether the archaeological materials from the Nojiri-ko Formation are indicative of human activity.

Bone material with a spiral fracture was recently found in the Nojiri-ko excavation and examined by Ono (2001), and the number of spiral flakes found has increased over time (Anthropology and Archaeological Research Group for Nojiri-ko Excavation, 2003). Norton et al. (2009) examined the cut marks on fossils from the Nojiri-ko Formation and determined that hunting had occurred around Nojiri-ko about 40 ka ago. However, Iwase et al. (2015) stated that these conclusions were not based on an accurate examination of other factors that were probably associated with the megafaunal demise. Nevertheless, the Nojiri-ko excavation did reveal that large mammals such as Naumann's elephant moved to Nojiri-ko between the two periods of coldest climate [Marine Isotope Stage (MIS) 4 and MIS 2], and human remains dated to the same time have been excavated from the formation. It is therefore reasonable to hypothesize that large mammals and humans moved to Nojiri-ko when the climate was relatively warm (i.e., in MIS 3). Considering the climate and environment 40 ka ago, it is certainly possible that humans coexisted with large mammals around Nojiri-ko.
Posted by Marnie at 7:49 AM No comments: Links to this post

This article reports antler remains from the Late Paleolithic site of Climăuți II (Republic of Moldova) confirming the presence of wapiti Cervus canadensis in the Late Pleistocene of Western Eurasia. The occurrence of wapiti in the East Carpathian area by 20 ky BP coincides with the local extinction of Megaloceros giganteus, Crocuta spelaea, and Ursus spelaeus, and substitution of local forest reindeer with grazing tundra-steppe Rangifer tarandus constantini. We here provide an overview of paleontological data and opinions on the presence of Cervus canadensis in Europe, a discussion on the taxonomic status and systematic position of the extinct deer Cervus elaphus palmidactyloceros, and propose a dispersal model for wapiti in Europe during the Late Pleistocene.
Posted by Marnie at 4:45 PM No comments: Links to this post