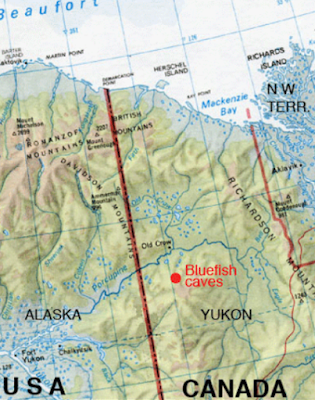 . . . and comment by an archaeologist working in the Canadian North, near the Yukon and Bluefish Cave:

"First off: There is a large portion of the archaeological community (mostly the younger set) who believe the NA was populated by humans MUCH earlier than we have indisputable proof for. You can just look at any Pre-Clovis study. There are LOTS of suggested sites, it's just hard to buck against the Clovis-First narrative without oodles of radiocarbon dated proof.

"Secondly: Blue Fish Cave is actually a series of three small caves, that Cinq-Mars excavated in the 70s and 80s. It's located way up north in the Yukon. Lots of us wanted to believe it was a pre-clovis site but that was hard to do in the 80s because of technological constraints and the common clovis narrative.

"Third: what Bourgeon & Burke (UdeM represent!) did was go back, and take a look at the faunal assemblages. The lithic assemblage includes a lot of fairly indisputable micro blades and cores (similar to a Siberian culture) but you can't really date lithics and the stratigraphic layers that included human things are quite large. But, what you CAN do is radiometrically date the faunal remains in those "active" layers, especially remains that have human-made cut marks.

"Fourth people are complaining that so few remains appear to be modified by humans. It's not that so few are modified, it's just that so few can be reasonable proven to be modified by humans and not the plethora of other, natural factors like carnivore gnawing (which honestly, could still be related to humans. I don't know what dog domestication may have looked like with the Blue Fish Cave people), or the aggressive freeze-thaw cycle in the cave. In fact, we should be celebrating how cautious they are at confirming human-modification over natural factors. Personally, I'm pretty happy with her modification criteria and the results seem solid to me.

"Fifth: (Ok I promise I'll be done ranting soon) What this study proposes is ‘Beringian standstill [or genetic isolation] hypothesis’. Basically this hypothesis is that people entered into the Yukon/Beringian region ~30,000 years ago BUT the area was so geographically isolated (glacial obstruction) that they were stuck there ~8000 years. This led to the human population becoming genetically and culturally isolated because of that geographic isolation. It's not proposing that people entered around blue fish and swiftly populated the rest of NA. This isn't a theory that completely throws out all other theories we have of the peopling of the americas."

"Anyway, I would highly suggest reading the PLoSone paper to get an idea of what they actually did."
Posted by Marnie at 4:14 PM No comments: Links to this post

Jiri Chlachula
from Chapter 3 in Archaeology, New Approaches in Theory and Techniques
published in 2012
(Link)
Posted by Marnie at 7:48 PM No comments: Links to this post

Outside Beringia: Why the Northeast Asian Upper Paleolithic Record Does Not Support a Long Standstill Model

The timing of the first entry of humans into North America is still hotly debated within the scientific community. Excavations conducted at Bluefish Caves (Yukon Territory) from 1977 to 1987 yielded a series of radiocarbon dates that led archaeologists to propose that the initial dispersal of human groups into Eastern Beringia (Alaska and the Yukon Territory) occurred during the Last Glacial Maximum (LGM). This hypothesis proved highly controversial in the absence of other sites of similar age and concerns about the stratigraphy and anthropogenic signature of the bone assemblages that yielded the dates. The weight of the available archaeological evidence suggests that the first peopling of North America occurred ca. 14,000 cal BP (calibrated years Before Present), i.e., well after the LGM. Here, we report new AMS radiocarbon dates obtained on cut-marked bone samples identified during a comprehensive taphonomic analysis of the Bluefish Caves fauna. Our results demonstrate that humans occupied the site as early as 24,000 cal BP (19,650 ± 130 14C BP). In addition to proving that Bluefish Caves is the oldest known archaeological site in North America, the results offer archaeological support for the “Beringian standstill hypothesis”, which proposes that a genetically isolated human population persisted in Beringia during the LGM and dispersed from there to North and South America during the post-LGM period. 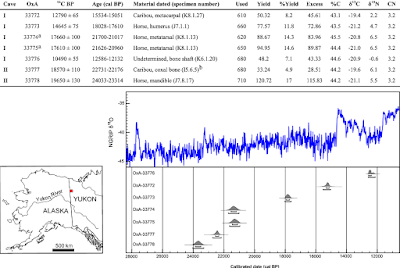 Posted by Marnie at 9:49 PM No comments: Links to this post